The memorial wall includes a plaque dedicated to the Arctic Convoys and each year a memorial service is held at the site to commemorate the service of Royal Navy, Royal New Zealand Navy (on secondment) and Merchant Navy personnel who took part in “the worst journey in the world”.

The memorial plaques are listed here: 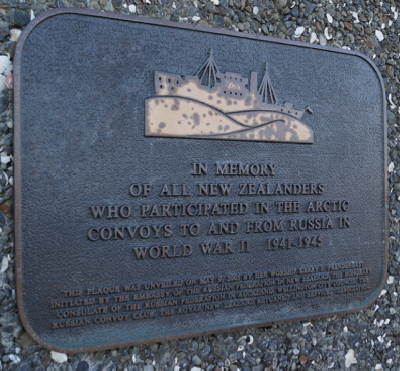 In memory of all New Zealanders who participated in the Arctic Convoys to and from Russia in World War II 1941-1945.

Dedicated to the memory of 33,730 British and Commonwealth merchant seamen who lost their lives as a result of enemy action during the Second World War.

WE WILL REMEMBER THEM 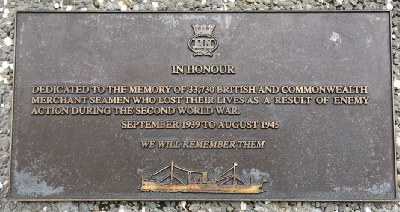 Dedicated to the memory of members of

Who died in the service of their country , especially those to whom the fortunes of war denied a known and honoured grave,

At the going down of the Sun

And in the morning

WELL WILL REMEMBER THEM

To commemorate the departure of the first New Zealand Regiment from Glasgow Wharf on the TSS Captain Cook on the 25th November 1957.

The Battalion sailed for service in the Malayan Emergency and this was the first time a New Zealand regular force had been dispatched on active service to serve in a war or emergency.

We honour those of our members who made the supreme sacrifice for their country and those members who have passed on. 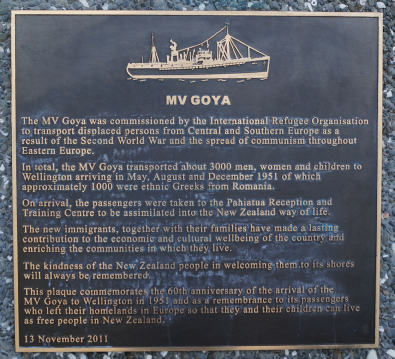 The MV Goya was commissioned by the International Refugee Organisation to transport displaced persons from central and Southern Europe as a result of the Second World War and the spread of communism  throughout Eastern Europe.

In total, the MV Goya transported about 3,000 men, women and children to Wellington arriving in May, August and December 1951 of which approximately 1,000 were ethnic Greeks from Romania.

On arrival, the passengers were taken to the Pahiatua Reception and Training Centre to be assimilated into the New Zealand way of life.

The new immigrants, together with their families have made a lasting contribution to the economic and cultural well being of the country and enriching the communities in which they live.

The kindness of the New Zealand people in welcoming them to its shores will always be remembered.

This plaque commemorates the 60th anniversary of the arrival of the MV Goya to Wellington in 1951 and as a remembrance to its passengers who left their homelands in Europe so that they and their children can live as free people in New Zealand. 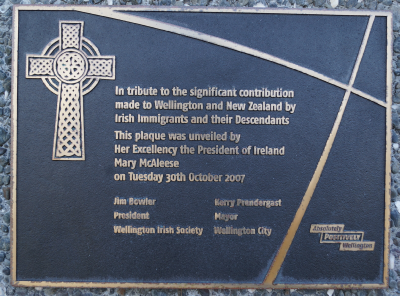 In tribute to the significant contribution made to Wellington and New Zealand by Irish Immigrants and their Descendants. 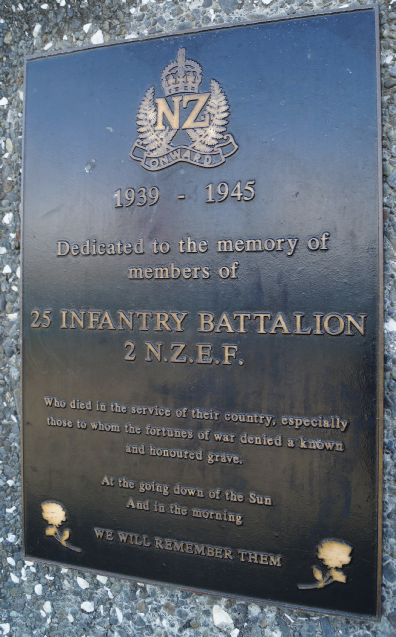 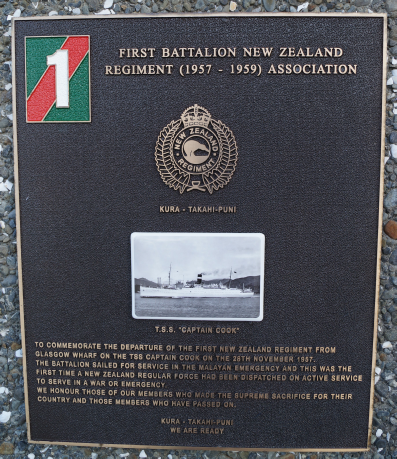 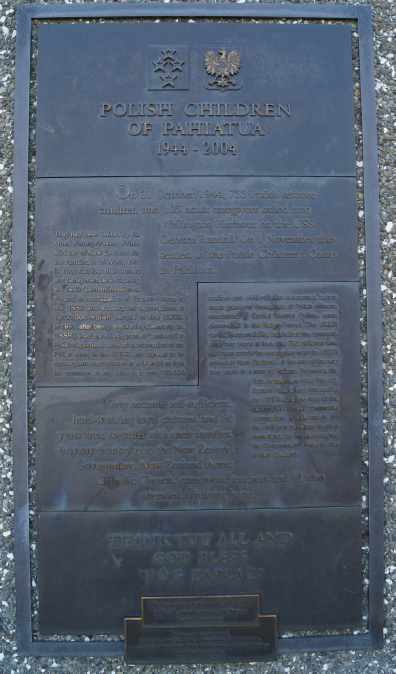 On 31 October 1944, 733 Polish children and 105 adult caregivers sailed into Wellington harbour on the USS General Randall. On 1 November, they settled in the Polish Children’s Camp in Pahiatua.

They had been invited by Rt Hon. Peter Fraser, Prime Minister of New Zealand, for the remainder of World War II. They had lost their homes and family members following the 1939 invasion of Poland, the occupation of Eastern Poland by the USSR and subsequent deportations of 1,700,000 Polish people to the USSR.

In 1941, after being attacked by Germany, the USSR joined the Allies, granted “amnesty” to Polish deportees, allowed the formation of the Polish Army in the USSR and agreed to its subsequent evacuation to Iran (Persia) to fight the common enemy. However, only 120,000 soldiers and civilians were evacuated, before mass graves of thousands of Polish citizens, murdered by Soviet Secret Police were discovered in Katyn Forest.  The USSR denied responsibility but halted the amnesty.

After two years in Iran, the 733 children who had been part of the evacuation from the USSR arrived in New Zealand. At the end of the war they were to return to Poland. However the Yalta Agreement ruled this out. Eastern Poland was annexed by the USSR and the rest of the country was under communist domination. It was unsafe for the children to return to their homeland, so most accepted the Government’s offer to stay in New Zealand.

They became self-sufficient, hard working loyal citizens and 60 years later, together with their families, they say thank you to the New Zealand Government, New Zealand Army, Catholic Church, caregivers, teachers and all who extended a helping hand.

THANK YOU ALL AND GOD BLESS

This plaque was unveiled on 25 October 2004 by Her Worship the Mayor of Wellington Kerry L. Prendergast 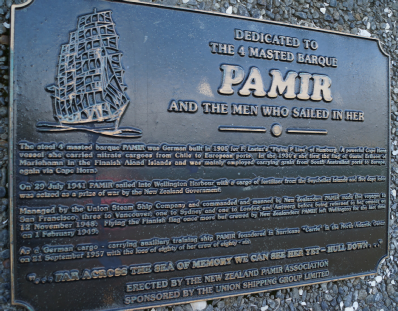 DEDICATED TO THE FOUR MASTED BARQUE

AND THE MEN WHO SAILED IN HER

The steel four masted barque PAMIR was German built in 1904 for F. Laeisz’s “Flying P Line” of Hamburg.  A powerful Cape Mora vessel, she carried nitrate cargoes from Chile to European ports.  In the 1930’s she flew the flag of Gustaf Erikson of Marlebamn in the Finnish Aland Islands and was mainly employed carrying grain from South Australian ports to Europe and again via Cape Horn.

On 29 July 1941 PAMIR sailed into Wellington Harbour with a cargo of fertiliser from the Seychelles Islands and five days later was seized as a prize of war by the New Zealand Government.

Managed by the Union Steam Ship Company and commanded and manned by New Zealanders, PAMIR made five voyaged to San Francisco, three to Vancouver, one to Sydney and one to London and Antwerp before being returned to her owners on 12 November 1948. Flying the Finnish flag once more but crewed by New Zealanders PAMIR  left Wellington for the last time on 1 February 1949.

As a German cargo carrying auxiliary training ship PAMIR foundered in hurricane “Carrie” in the North Atlantic Ocean on 21 September 1957 with the loss of eighty of her crew of eighty six. 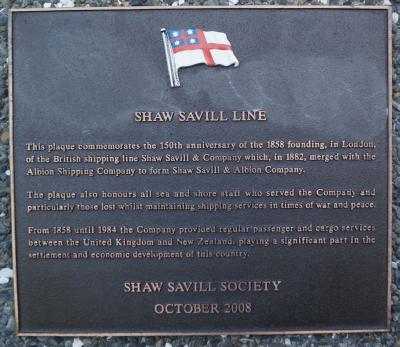 This plaque commemorates the 150th anniversary of the 1858 founding, in London, of the British shipping line Shaw Savill and Company  which in 1882 merged with the Albion Shipping Company to form Shaw Savill & Albion Company.

The plaque also honours all sea and shore staff who served the Company and particularly those lost whilst maintaining shipping services in times of war and peace.

From 1858 until 1984 the Company provided regular passenger and cargo services between the United Kingdom and New Zealand, playing a significant part in the settlement and economic development of this country. 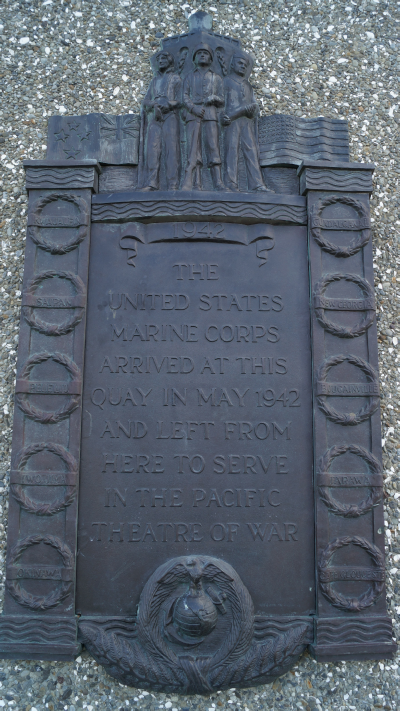 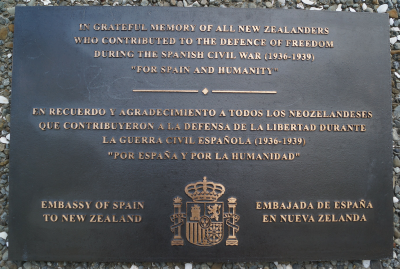 IN GRATEFUL MEMORY OF ALL NEW ZEALANDERS

WHO CONTRIBUTED TO THE DEFENCE OF FREEDOM

‘”FOR SPAIN AND HUMANITY”

EMBASSY OF SPAIN TO NEW ZEALAND 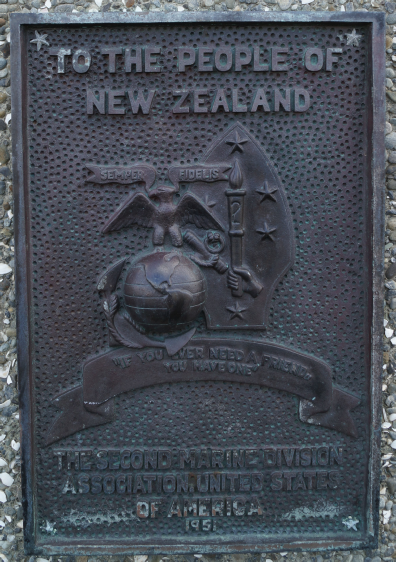 TO THE PEOPLE OF

“IF YOU EVER NEED A FRIEND, 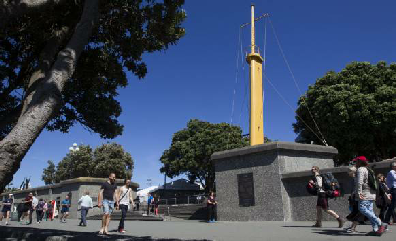 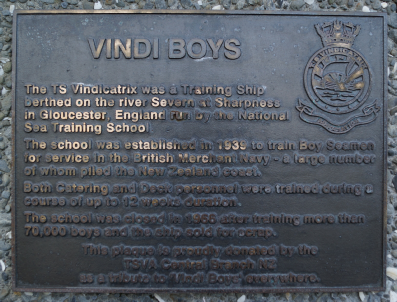 The TS Vindicatrix was a Training Ship berthed on the River Severn at Sharpness in Gloucester, England run by the National Sea Training School.

The school was established in 1939 to train Boy Seamen for service in the British merchant Navy - a large number of whom plied the New Zealand coast.

Both catering and deck personnel were trained during a course of up to 12 weeks duration.

The school was closed in 1966 after training more than 70,000 boys and the ship sold for scrap.

The plaque is donated by the TSVA Central Branch NZ

As a tribute to Vindi Boys everywhere.