The Arctic Star is awarded for operational service of any length north of the Arctic Circle, defined as 66° 32’ North Latitude. The inclusive qualifying period of service is 3 September 1939 to 8 May 1945. Though the Arctic Star is intended to recognize the service of personnel in the Arctic convoys of World War II, other members of the military and civilians may qualify.

Eligibility is defined as follows:

a) Royal Navy and Merchant Navy personnel must have served anywhere at sea north of the Arctic Circle including, but not limited exclusively to, those ships participating in, and in support of convoys to North Russia. Fleet Air Arm personnel, not qualified by sea service, may qualify under the criteria applicable to Royal Air Force personnel.

b) Aircrew of the Royal Air Force are eligible if they landed north of the Arctic Circle or served in the air over this area. Non aircrew on operational service in the area, for example ground crew or those sailing with CAM ships (Catapult Aircraft Merchant Ships), are also eligible.

c) Army personnel serving in His Majesty’s ships or in defensively equipped Merchant ships qualify under the rules applying to the Navy or Merchant Navy. Personnel taking part in land operations north of the Arctic Circle are also eligible for award.

d) Civilian Members of the few approved categories who qualify for Campaign Stars will be eligible so long as they meet any qualifying criteria while serving in support of military operations.

e) Foreign nationals serving in British or Dominion Forces, such as the Royal Canadian Navy, Royal Australian Navy and Royal New Zealand Navy, are eligible for the Arctic Star so long as the individuals have not been recognized by a similar award from their own governments.

Eligibility for the Arctic Star does not affect an individual's eligibility for any other previously awarded campaign medals, nor does it automatically entitle individuals for any further awards.

Awarded for Bravery and Courage in Naval Theatres.

In recognition of service during the Arctic Convoys of WW2, qualifying veterans of the Arctic Convoys resident in New Zealand were awarded this decoration at a ceremony at the Russian Embassy Wellington on Friday 14 September 2012.

The Arctic Emblem was awarded in October 2006 to members of the Arctic Campaigns of World War II as a special award to mark their bravery. Veterans campaigned for a medal rather than an emblem to be awarded but a decision was made in 1946 not to create any more medals for WWII campaigns.

The Arctic Emblem is authorised for wear on the lapel, or above the left breast pocket, either on occasions when it is appropriate to wear medals, or on its own with either formal or informal dress. All those persons who served for at least one day north of the Arctic Circle (latitude 66°32' N) and west of the Urals between 3 September 1939 and 8 May 1945 in the Armed Forces or the Merchant Navy qualify for the Emblem.

The medal is silver, 36mm in diameter. The obverse bears the image of three successive Sovereigns, King George V, King George VI and Queen Elizabeth II. The reverse shows a mounted figure of Britannia in a chariot pulled by two sea-horses. The ribbon is crimson-coloured with three white stripes

Each medal is inscribed with name, rank and official number. RCCNZ members who have not received this medal may apply by completing the attached form and forwarding to the Ministry of Defence (UK) Medal Office as detailed.

This Jubilee Medal was issued by decree of the President of the Russian Federation dated 15 March 1995 to mark the "50th anniversary of victory in the Great Patriotic War 1941-1945".

This medal was presented to veterans of the Arctic Convoys to mark the "65th anniversary of victory in the Great Patriotic War 1941-1945". It was awarded to recipients in Wellington on Friday 7 May 2010 by the Ambassador of the Russian Federation in New Zealand.

This medal was presented to veterans of the Arctic Convoys to mark the "70th anniversary of victory in the Great Patriotic War 1941-1945". It was awarded to recipients in Wellington on Friday 10 April 2015 by the Ambassador of the Russian Federation in New Zealand.

This medal was awarded to surviving veterans of the Arctic convoys to mark the 75th anniversary of victory in the Great Patriotic war 1941-1945. It was awarded on 31 March 2020 by the Ambassador of the Russian Federation in New Zealand. 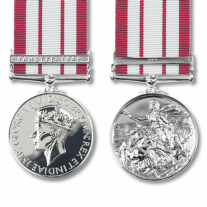