The following year I was signed on as an Able Seaman aboard SS Charlbury. En route from Cardiff to Buenos Aires with a cargo of coal we detached from the South Africa bound convoy ON93 and sailed independently without escort. On 28 May 1942 we were intercepted by the Italian submarine RM Barbarigo* off the coast of Brazil. The Italians wasted no time in firstly raking the ship with machine guns then firing a torpedo which missed as the Skipper turned hard to starboard. Then started the shelling by the deck gun which lasted for some time. Two men were killed and several injured. Eventually he torpedoed us just aft of the engine room. The explosion blew the propeller off resulting in the prop shaft turning, with no resistance, at an alarming speed. Then came the order to abandon ship. The lifeboats were all ready to be lowered (a wartime measure) and the wounded placed aboard before lowering.

By this time I realised I had shrapnel wounds to my kneecap and my nose but my main worry was the terrible pains in my lower abdomen which I'd had for some six weeks. Four boats were lowered and were pulled away from the doomed ship. Within ten minutes she had broken her back and the two halves, bow and stern, lifted up and went to the bottom. Of the four lifeboats, one was so severely damaged as to be useless due to the machine gunning having damaged the buoyancy tanks. The crew were shared amongst the other three.

Keeping together was difficult and the three gradually drifted apart. It became a constant battle bailing out due to machine gun damage and bad weather . We had a ration of water, hard tack biscuits and pemmican (which tasted like Marmite). Rain water was collected on a tarpaulin and scooped up eagerly.

Days went by and we began to have hallucinations of seeing land which wasn't there and it was getting close to the tenth day. We were unaware that the Chief Mate's boat had been rescued and had informed them about the other boats. The Mates' boat was lucky not to have been fired on. The rescuing ship, the cruiser USS Omaha, spotted what they thought was a German sub on the horizon and were all ready to blaze away with everything when a lookout shouted “IT'S A LIFEBOAT!". After a day or so they located our lifeboat and we were landed at Recife-Pernambuco in Brazil. We had been in the lifeboat for ten days .

My abdominal pains were diagnosed as appendicitis. After the operation and recuperation I found all the crew had gone to America by air. I followed them after a week or so eventually joining a ship in Portland, Maine. This was the Ocean Messenger and we arrived in Cardiff in November 1942. I then joined the Deep Sea Rescue Tugs where we wore Royal Navy uniform and were under Naval discipline but drawing Merchant Navy pay. We were in Yugoslavia when the war ended.

* The Italian submarine RM Barbarigo was later converted to a transporter. She was last heard of on 16 June 1943 en route from Germany to Japan with a cargo of war material. Her fate is unknown.

My first trip to sea was in December 1939, aged 14, aboard SS Peterton and we were bound for Montevideo in Uruguay. Passing the scuttled Graf Spee, with her mast and funnels showing above the waterline, we youngsters took great pleasure in giving her the "fingers" salute. We were probably one of the first British ships to see her after the great battle.

I did three trips to Canada and America before a spell on the British coast aboard SS Collingdoc. Whilst en route from the Thames to the Tyne on 13 July 1941, we struck a mine four cables off Southend Pier resulting in the loss of Chief Engineer Wilson and Second Engineer Stutchbury. The rest of the crew were landed on the pier. The ship was later salvaged, towed to Rosyth, then Scapa Flow where she was sunk as a block ship in March 1942. My next ship was SS Atlantic. By this time, in August 1941 and aged 16, I was a deck boy and on my way to Archangel as part of convoy PQ1, only the second of the Russian convoys, the first being "Dervish". 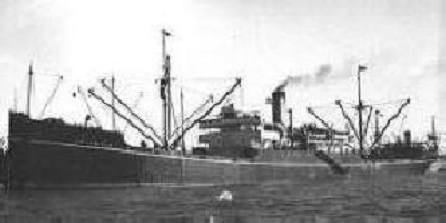