The Arctic convoys of World War II were oceangoing convoys which sailed from the United Kingdom, Iceland, and North America to northern ports in the Soviet Union - primarily Arkhangelsk (Archangel) and Murmansk, both in modern-day Russia. Although there were two gaps with no sailings between July and September 1942, and March and November 1943, there were 78 convoys between August 1941 and May 1945, sailing via several seas of the Atlantic and Arctic oceans.

About 1,400 merchant ships delivered essential supplies to the Soviet Union under the Lend-Lease program, escorted by ships of the Royal Navy, Royal Canadian Navy, and the U.S. Navy. Eighty-five merchant vessels and 16 Royal Navy warships (two cruisers, six destroyers, eight other escort ships) were lost. Nazi Germany's Kriegsmarine lost a number of vessels including one battleship, three destroyers and at least 30 U-boats as well as a large number of aircraft. The convoys demonstrated the Allies commitment to helping the Soviet Union, prior to the opening of a Second Front, and tied up a substantial part of Germany's Navy and Air Force.

About the Arctic Convoys

The Arctic convoys ran in two series, following the first convoy, which was un-numbered but code-named “Dervish”.

The first series, PQ (outbound) and QP (homebound), ran from September 1941 to September 1942. These convoys ran twice monthly, but were interrupted in the summer of 1942 when the series was suspended after the disaster of PQ17 and again in the autumn after the final convoy of the series, PQ18, due to lengthening daylight hours, and continued preparations for Operation Torch.

The convoys ran from Iceland (usually off Hvalfjörður) north of Jan Mayen Island to Arkhangelsk when the ice permitted in the summer months, shifting south as the pack ice increased and terminating at Murmansk. From February 1942 they assembled and sailed from Loch Ewe in Scotland.

How the convoys operated

The "Dervish" convoy assembled at Hvalfjörður and sailed on 21 August 1941. It arrived at its destination, Archangel, ten days later. The convoy was relatively small and consisted of only six merchant ships: Lancastrian Prince, New Westminster City, Esneh, Trehata, the elderly Llanstephan Castle, the fleet oiler Aldersdale and the Dutch freighter Alchiba. The Commodore was Captain JCK Dowding RNR. The escorts comprised the ocean minesweepers HMS Halcyon, Salamander and Harrier, the destroyers HMS Electra, Active and Impulsive and the anti-submarine trawlers HMS Hamlet, Macbeth and Ophelia. As evidence of Churchill's astute mastery of propaganda, on board Llanstephan Castle were two journalists and the artist, Felix Topolski.

On 30 May 1942, the surviving ships of Convoy PQ 16 arrived, most ships to Murmansk and eight ships to Archangel; the convoy was such a success in terms of the war stores delivered that the Germans made greater efforts to disrupt the following convoys. The crane ships from PQ16 including SS Empire Elgar stayed at Archangel and Molotovsk (now Severodvinsk) unloading convoys for over 14 months.

The Arctic convoys caused major changes to naval dispositions on both sides, which arguably had a major impact on the course of events in other theatres of war. As a result of early raids by destroyers on German coastal shipping and the Commando raid on Vaagso, Hitler was led to believe that the British intended to invade Norway again. This, together with the obvious need to stop convoy supplies reaching the Soviet Union, caused him to direct that heavier ships, centred on the battleship Tirpitz, be sent to Norway. The Channel Dash was partly undertaken for this reason.

As a "fleet in being", Tirpitz and the other German capital ships tied down British resources which might have been better used elsewhere, for example combating the Japanese in the Indian Ocean. The success of Gneisenau and Scharnhorst in Operation Berlin during early 1941 had demonstrated the potential German threat. However, as the air gap over the North Atlantic closed, Huff-Duff (radio triangulation equipment) improved, airborne centimetric radar was introduced and convoys received escort carrier protection, the scope for commerce raiding diminished.

Aside from an abortive attempt to interdict PQ12 in March 1942 and a raid on Spitsbergen in September 1943, Tirpitz spent most of World War II in Norwegian fjords. She was penned in and repeatedly attacked until she was finally sunk in Tromsø fjord on 12 November 1944 by the RAF. Other Kriegsmarine capital ships either never got to Norway (e.g. Gneisenau), were chased off, or were sunk by superior forces (e.g. Scharnhorst). In particular, the unsuccessful attack on convoy JW-51B (the Battle of the Barents Sea), where a strong German naval force failed to defeat a British escort of cruisers and destroyers, infuriated Hitler and led to the strategic change from surface raiders to submarines. Some capital ships were physically dismantled and armament used in coastal defences.

Leningrad under the siege was one of important destinations for supplies from the convoys. From 1941 food and munition supplies were delivered from British convoys to Leningrad by trains, barges, and trucks. Supplies were often destroyed by the Nazi air-bombings, and by Naval Detachment K while on the way to Leningrad. However, convoys continued deliveries of food in 1942, 1943, and through 1944. Towards the end of the war the material significance of the supplies was probably not as great as the symbolic value hence the continuation - at Stalin's insistence - of these convoys long after the Soviets had turned the German land offensive.

It has been said that the main value of the convoys was political, proving that the Allies were committed to helping the Soviet Union at a time when they were unable to open a second front.

ULTRA intelligence gained from the cracking of the Enigma code at Bletchley Park played an important part in the eventual success of these convoys. Pre-emptive action was not always possible, but the intelligence did allow the Royal Navy to prepare for battle and convoys could be given appropriate escorting forces. The interception and consequent sinking of Scharnhorst by HMS Duke of York was greatly assisted by ULTRA intercepts.

The Arctic route was the shortest and most direct route for lend-lease aid to the USSR, though it was also the most dangerous. Some 3,964,000 tons of goods were shipped by the Arctic route; 7% was lost, while 93% arrived safely. This constituted some 23% of the total aid to the USSR during the war.

Other routes used for the passage of goods were the Persian Corridor and the Pacific Route.

The Persian corridor was the longest route, and was not fully operational until mid-1942. Thereafter it saw the passage of 4,160,000 tons of goods, 27% of the total.

The Pacific route opened in August 1941, but was affected by the start of hostilities between Japan and the US; after December 1941, only Soviet ships could be used, and, as Japan and the USSR observed a strict neutrality towards each other, only non-military goods could be transported. Nevertheless, 8,244,000 tons of goods went by this route, 50% of the total.

A branch of the Pacific Route began carrying goods through the Bering Strait to the Soviet Arctic coast in June 1942. From July through September small Soviet convoys assembled in Providence Bay, Siberia to be escorted north through the Bering Strait and west along the Northern Sea Route by icebreakers and Lend-Lease Admirable class minesweepers. A total of 452,393 tons passed through the Bering Strait aboard 120 ships. Part of this northern tonnage was fuel for the airfields along the Alaska-Siberia Air Route. Provisions for the airfields were transferred to river vessels and barges on the estuaries of large Siberian rivers. Remaining ships continued westbound and were the only seaborne cargoes to reach Archangel while JW convoys were suspended through the summers of 1943 and 1944.

Outbound and homebound convoys were planned to run simultaneously; a close escort accompanied the merchant ships to port, remaining to make the subsequent return trip, whilst a covering force of heavy surface units was also provided to guard against sorties by German surface ships, such as Tirpitz. These would accompany the outbound convoy to a cross-over point, meeting and then conducting the homebound convoy back, while the close escort finished the voyage with its charges.

The route was around occupied Norway to the Soviet ports and was particularly dangerous due to the proximity of German air, submarine and surface forces and also because of the likelihood of severe weather, the frequency of fog, the strong currents and the mixing of cold and warm waters which made ASDIC use difficult, drift ice, and the alternation between the difficulties of navigating and maintaining convoy cohesion in constant darkness in winter convoys or being attacked around-the-clock in constant daylight in summer convoys.

In July 1942, convoy PQ 17 suffered the worst losses of any convoy in the Second World War.

Under attack from German aircraft and U-boats, the convoy was ordered to scatter, following reports that a battle group, which included the battleship Tirpitz, had sailed to intercept the convoy (although the German group did not leave port until the following day, and was subsequently ordered to return to port).

Only 11 of the 35 merchant ships in the convoy succeeded in running the gauntlet of U-boats and German bombers. This convoy is said to have inspired author Alistair MacLean to write his first novel HMS Ulysses.

The Battle of the Barents Sea: In December 1942, German surface forces, including the heavy cruiser Admiral Hipper and pocket battleship Lützow sailed to intercept Convoy JW 51B. The German force was driven off by a combined force of destroyers and cruisers.

In December 1943, Convoy JW 55B was the target of the German battleship Scharnhorst. However two British warship Forces were in the area. In the resulting Battle of the North Cape, Scharnhorst first encountered British cruisers then was sunk by HMS Duke of York and her escorts in a night action before it could return to port. German destroyers missed the convoy which had been diverted north based on intelligence from the Norwegian resistance movement. 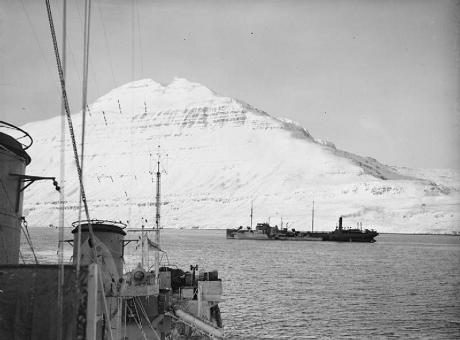 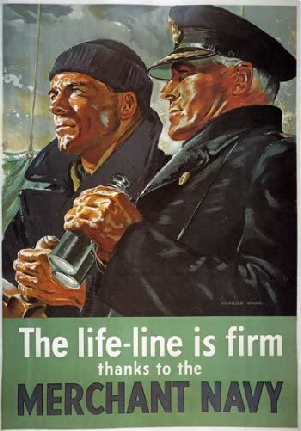