My name is John L. Haynes, a retired Naval Aviator with the rank of Lieutenant Commander.

After loading in Philadelphia left in late February for Halifax and then sailed independently to Loch Ewe, Scotland where we joined Convoy PQ 13. We left Loch Ewe on 10 March 1942 for Murmansk via Iceland and arrived 31 March.

While in Murmansk, our gun crew was credited by the Russian Government with shooting down 3 German bombers, for which we received an extra months pay. Six months later I received a Commendation from the Secretary of the Navy for this action. Our ship was never severely damaged nor did we lose any of the gun crew or ships company.

We arrived back in the US the latter part of May and a month later I transferred out of the Armed Guard to Aircraft Mechanics school. A year later after serving with a Torpedo Squadron as a mechanic and turret gunner, I applied for and was selected for flight training. After completion of my flight training and commissioned Ensign, was assigned as a Carrier Based dive bomber pilot flying SB2C "Helldivers".

I have been an active pilot most of my adult life and at age 84, I am in excellent health and still fly. I am currently a member of a Soaring Club in Indiana and fly both the sailplanes and the tow planes.

I just returned from a fabulous visit to Russia. I was invited by the US Consul General and the Russian Veterans to help celebrate the 70th anniversary of the First Convoy, called the “Dervish”, which arrived in Russia August 31st, 1941.

I served as a seaman gunner on the Merchant ship SS Eldena in Convoy PQ-13 arriving in Murmansk March 31st 1942, loaded with war materials for Russia’s fight against the Nazi invasion. I wrote a small book about my life in the Navy during World War II, entitled Frozen Fury – The Murmansk Run of Convoy PQ-13, a large part of which was about delivering war goods to Russia.

I sent a copy of Frozen Fury to my friend in Russia, Captain First Class Igor Kozyr, a retired submarine Captain and he translated it into Russian and had it published there. The other part of my visit was to formally present my book to the Russian Veterans, museums and libraries. The book was so well received and I was honoured on so many occasions it was overwhelming. I was interviewed three times on TV and spoke at the Polar Convoy Club Round Table and at a reception at the Consul Residence as well as at several schools.

My daughter, Renita, accompanied me on the visit and took over three hundred pictures. Never in my wildest dream did I ever think my little book would generate so much interest. The Russian people were so very warm and friendly. They treat their Veterans with great respect. I had a number of them thank me almost in tears saying, “Without your help I may not be here today”. It was a very humbling experience. It was a visit of a lifetime and I’d love to go back again. 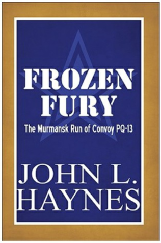 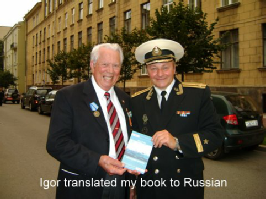 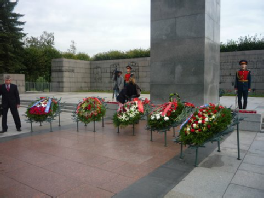 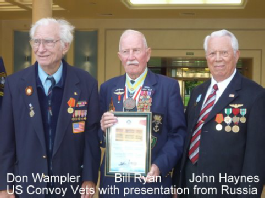 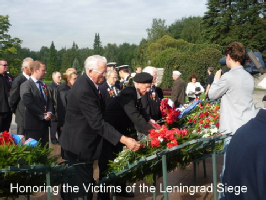 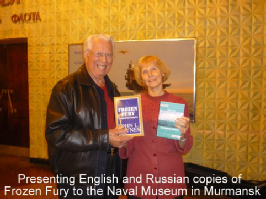