As a volunteer I enlisted in the New Zealand Division of the Royal Navy in May 1941 and in December sailed for the United Kingdom in MV Dominion Monarch, on loan to the Royal Navy. After three months at HMS Ganges I joined ‘HMS Malcolm’ as Navigator’s Yeoman. She was recommissioning after a major refit at Devonport Dockyard and after working up sailed for Liverpool where she became a Special Escort Destroyer of Western Approaches based in Gladstone Dock.

Our C.O. was Commander A.B. Russell RN, a distinguished senior escort officer, and we were employed on some special convoy duties in the Atlantic including escorting the troop ship Llanstephan Castle, which had been torpedoed, from the west of Finisterre to the Clyde. Early July we sailed for Hvalfjordur as S.O. Close Escort for a Russian convoy which was recalled after about two days steaming. We returned to Hvalfjordur from where we escorted the Fleet Oiler ‘Blue Ranger’ to Scapa Flow then back to Liverpool.

Sailed from Gourock on 2 August 1942 oiling at Moville prior to rendezvousing with a convoy of fast large merchant ships which was subsequently joined by Rodney, Nelson, Aircraft Carriers, Cruisers and more Destroyers. Oiled at Gibraltar and rejoined what was ‘Pedestal’ bound for Malta. Malcolm’s special task was one of two Destroyers escorting ‘Furious’ and being close to ‘Eagle’ when she was torpedoed on the 11th, we rescued 198 survivors while several dead were recovered and subsequently buried with proper naval honours. During the night, in company with ‘Wolverine’, attacked an Italian submarine ‘Dagabur’ which Wolverine rammed and sank. Next day hunted another U-Boat which eventually took refuge in Spanish Ibiza. On way to rejoin the convoy picked up air crew in life raft from RAF aircraft shot down and then we were redirected to escort ‘Nigeria’ which had been badly damaged by torpedo attack in the Straits of Pantelleria.

We then escorted towards Malta ‘Furious’ for three trips, delivering Spitfires to within flying range of Malta. Returned to Liverpool, boiler clean and then to Loch Ewe where merchant ships of PQ18 convoy assembled with ‘Malcolm’ as senior officer close escort PQ18 going right through to Archangel arriving on 21st September and during our stay the docks were under constant air attack. 2nd October we were ordered to Vaenga (Kola Inlet) to obtain small supply of fuel oil and then proceed independently to Seydisfjord – a very harrowing experience as our shortest course took us close to the occupied North Norwegian Coast. Refuelled at Seydisfjord and back to Liverpool, encountering storm force conditions which caused much damage.

The ship was dry docked for repairs and structural alterations which included a substantially reinforced stem. 20th October sailed for Belfast to assemble convoy of a strange mixture of ships including three LST’s and as S.O. escorted them safely to Gibraltar – 14 days of stormy conditions. 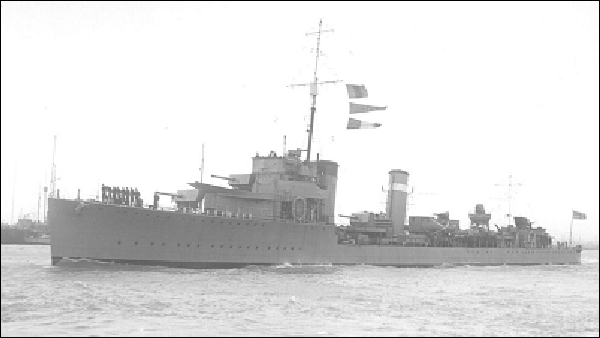 Refuelled at Gibraltar and learned that we were part of “Torch”, the invasion of North Africa, and along with Broke, Malcolm was to storm Algiers Harbour – smash the boom, seize important port installations and prevent the scuttling of French warships. About 3.00am caught in searchlight beams and were subjected to a withering barrage of fire from the shore batteries. Malcolm sustained several direct hits – forward boiler destroyed and engine room badly holed, bridge structure including TS, chartroom and conning position damaged with midships area on fire she was forced to withdraw slowly sinking. Algiers surrendered later that day and the following day Malcolm was assisted to a berth in the Old Port where temporary repairs were carried out so that after a week we sailed with three corvettes as escort for some merchant ships back to Gibraltar – then a week later returned to the Clyde as part of escort for ‘Duke of York’ and ‘Victorious’. Then on to Sheerness and Chatham Dockyard for major repairs.

I left ‘Malcolm’, then to ‘Newfoundland’ commissioning after building at Swan Hunter’s Yard at Wallsend-on-Tyne. Nine weeks later when on seven days’ leave prior to going to ‘King Alfred’ I was visiting relations in Salcombe, South Devon, when it was subjected to a Baedeker Raid by a squadron of FW190’s and the house received a direct hit. I was rescued after being buried for several hours and was hospitalised for four months before starting my course at King Alfred.

After V.E. Day granted foreign service leave to return to New Zealand with reappointment at end of leave to British Pacific Fleet based at Darwin. V.J. Day declared and at the end of November 1945 declared surplus to requirements and discharged from active service, remaining on Reserve of Admiralty Compass Officers until late 1950’s – my last refresher course being in 1956 during a visit to the U.K.